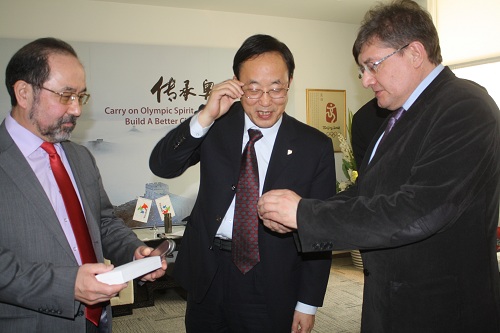 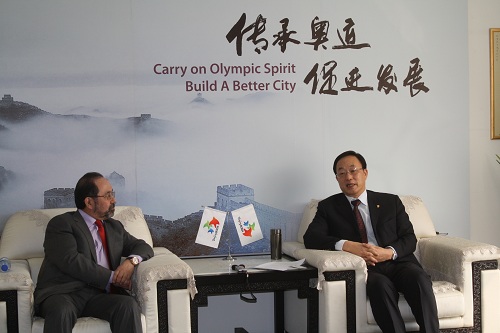 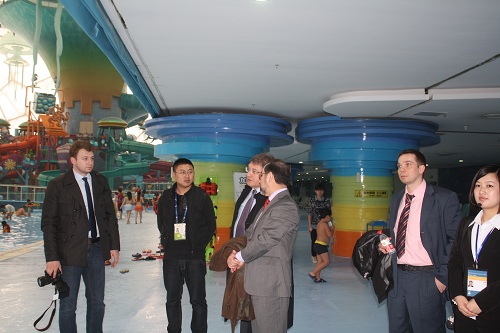 Russian reports are interviewing in Water Park of Water Cube. 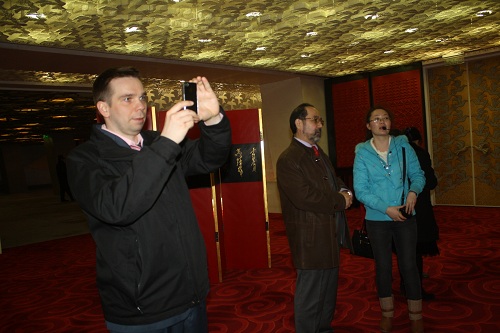 On March 16, in order to strengthen the communication and cooperation between Russia and China in sports, Liu Jingmin, Deputy Director of CPPCC Committee of Education, Science, Culture, Health and Sports and Executive Vice President of BODA received a joint interview by Marat SisenovichAbulkhatin, Chief Director of ITAR-TASS, Kirillov, Director of TASS Office in Beijing and Vladimir Solovyov , Chief Reporter of RossiyskayaGazeta.

In the interview, Liu Jingmin introduced the post-Games operation, development and use of venues as well as the situation of exchange between Beijing and Sochi 2014 Winter Olympics. According to him, in planning, site selection, design and construction of the 31 venues of Beijing Olympic Games, their post-Games use was fully taken into consideration, therefore laying a foundation for their post-Games development and use. After 2008, the Olympic venues represented by National Stadium (Bird’s Nest) and National Swimming Center (Water Cube), by developing public benefit activities, holding high-quality performances and large culture and sports events, developing quality tourism intangible assets, have realized a balance of financial revenue and expenditure, got good economic and social benefits and further perfected the national fitness function, providing the public with better sports culture service.

According to Liu Jingmin, after Beijing Olympics, BODA has actively developed communication and exchanges with the Organizing Committee of Sochi Winter Olympics, introducing them the work situation of voluntary service, and meanwhile, BODA has introduced Russian Paralympic Committee the successful experience of Beijing in support the Olympics from hotels, venues and facilities and simultaneous interpretation service, etc. This year, BODA will have further exchanges with the Organizing Committee of Sochi Winter Olympics. The Russian reporters expressed that,Beijing did a good job in inhering the Olympic legacies, which is worth of reference by Sochi Winter Olympics. They held that BODA would visit Russia for more effective communication and exchanges.

After the interview, the Russian reporters also went to the Bird’s Nest and the Water Cube, to interview the post-Games use of these two venues.