The successful Beijing 2008 Olympic & Paralympic Games have left rich legacy for China and Beijing both in material and social forms.To continue this sound momentum and build on the successful experience of the Games, Beijing Municipal Government has turned the three Olympic slogans into “Humanistic Beijing, Hi-Tech Beijing and Green Beijing”, and decided to set up Beijing Olympic City Development Association (hereinafter referred to as the “BODA”), which is officially announced in August, prior to the first anniversary of the Beijing 2008 Olympic Games.

BODA is a non-profit organizational legal person registered with Beijing Civil Affairs Bureau. Mr. Liu Qi, Former Secretary of the Beijing Municipal CPC Committee, is the Chairman of BODA. Mr.GuoJinlong, Former Mayor of Beijing Municipal Government, is the Honorary Chairman of BODA. BODA exercises a membership system. There are 63 founding organizational and individual members. The organizational members include the relevant organs of Beijing Municipal Government, China Disabled Persons' Federation, universities and research institutes which devote to the development of Olympic movement; Beijing Olympic & Paralympic Partners and Sponsors and local enterprises. The individual members include personages of high prestige in society who made remarkable contribution to the Games and people having great influences in related fields.

The Mission of BODA:

To develop the Olympic spirit, expandthe Olympic achievements, promote the sustainabledevelopment of Olympic and Paralympic causes in the city,contribute to the construction of Humanistic Beijing, High-techBeijing and Green Beijing and accelerate the development ofBeijing as a modern developed city and an international sportsculture center.

The Scope of Operation of BODA:

To mobilize social forces tocarry forward the Olympic spirit and boost the development ofthe Olympic Movement in the city;

To support the developmentof public welfare and health work including Olympic culture,education, sport, youth, people with disabilities and volunteerservice etc., and contribute to the development as a developed cityand an international sports center;

The Secretariat of BODA (Beijing Olympic City Development Center) is responsible for the daily operations of BODA. 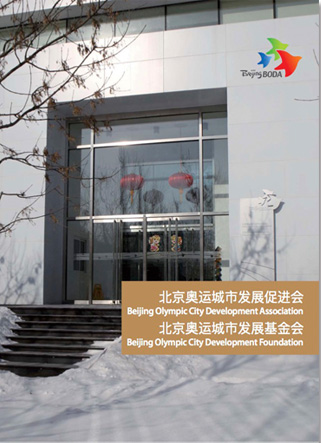